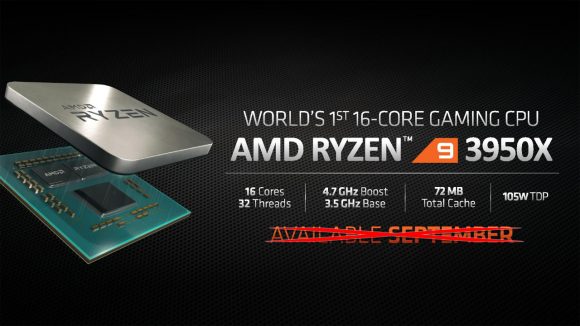 We already know that the AMD Ryzen 9 3900X CPU is doing great for CPU mining with its 12 cores and 24 threads for the the new RandomX algorithm (RandomX CPU Benchmarks), so the demand for that particular processor is pretty high and there are shortages and price speculations. Not to mention that it is still pretty had to find, regardless of the price, in many places as it is doing great not only for mining… it is considered to be one of the best CPUs at the moment for PC enthusiasts and gamers as well. Next month we are hopefully going to see the even more powerful AMD Ryzen 9 3950X, originally scheduled to be released in September with a recommended price of $749 USD, however delayed by AMD for November release in order to meet the high user demand after they saw what is happening with the 3900X.

AMD Ryzen 9 3950X is a processor with 16 cores and 32 threads, base clock of 3.5 GHz with max boost up to 4.7 GHz and a default TDP of 105W. The same 105W TDP that the 3900X has, however the base frequency is lower in order to accommodate the extra 4 cores into the same TDP level. Thee extra 4 cores and 8 threads should easily add something like another 30% of extra hashrate for RandomX on top of the 12000 H/s or more that the 3900X already manages to deliver, so we re talking about 18000 H/s or more (especially if you overclock the processor). Now that will be one hell of a performance compared to what you can currently get with high-end GPUs for RandomX or even what Intel high-end end-user processors are able to deliver.

It all seems nice and comfy when talking about specifications and expected hashrate, but when mining is concerned we also need to talk about profitability and time to ROI… Well, unfortunately at the moment the profitability of the coins that use RandomX or a modified variant of the algorithm are far from being very profitable even with 3900X and 3950X CPUs. We are hoping that the upcoming Monero (XMR) fork to RandomX will help with that, but it is at the end of November and it is still hard to justify building a PC with 3900X or 3950X just for CPU mining at this point. If you build a new PC for gaming or work where you need the large number of cores and occasionally use it for mining instead of leaving it sti idle or be turned off, then it is much more reasonable.