Cardano [ADA] is one of the lesser talked-about coins, despite months of incredible performances that have been overshadowed by the likes of the Bitcoin [BTC] bulls, Binance Coin’s [BNB] ATH breach and Litecoin’s [LTC] halving surge. Contrary to the status quo, the collective market’s sideways movement has been a firm testing ground for the recent ADA breakout.

Witnessing a massive 4.39 percent hourly gain, the cryptocurrency stormed into the top-10 by replacing the secondary Bank Coin, Stellar Lumens [XLM]. From a 24-hour perspective, ADA posted a 10.94 percent gain. Surprisingly, Cardano saw its price skyrocket by over 14 percent over the week. 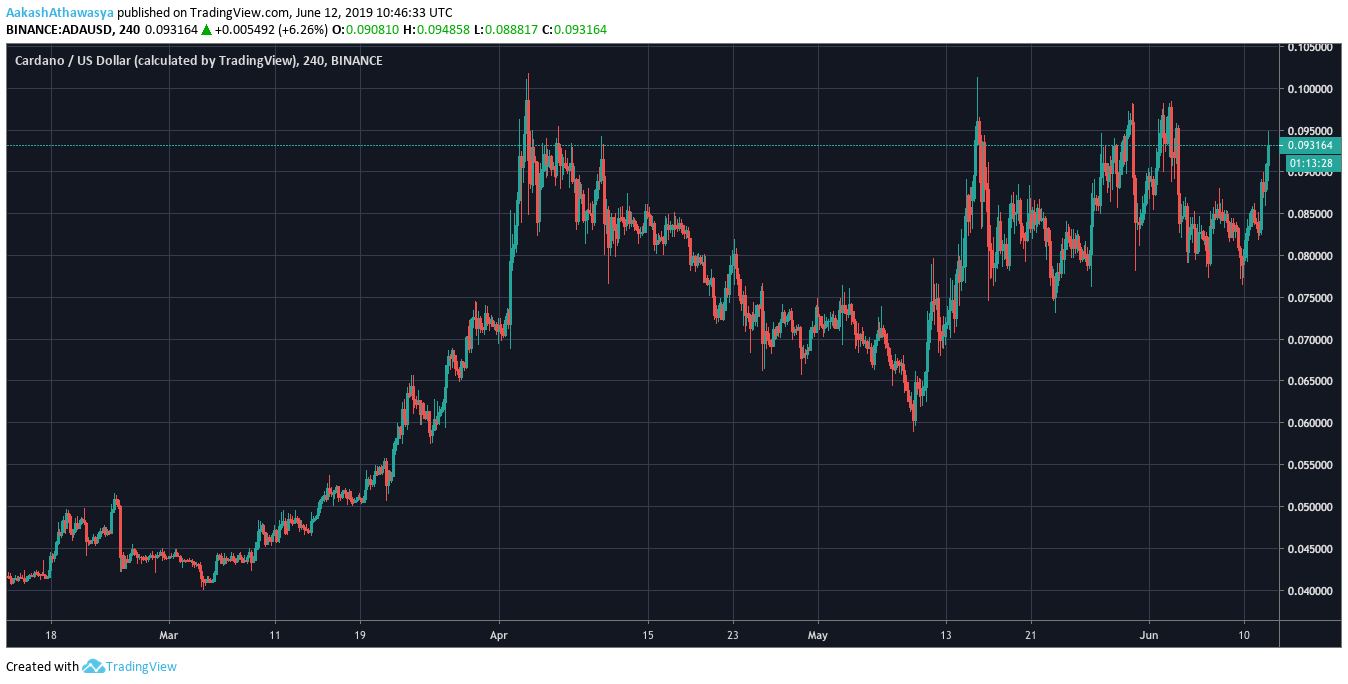 A major chunk of the weekly rise began as Bitcoin fell short of the $8,000 mark, providing an impetus for the altcoin market to take charge that resulted in Litecoin’s and ADA’s ascent. On June 10, ADA rose from $0.078 by 8.98 percent to reach $0.085 in a matter of 14 hours. Following the spike, the cryptocurrency began trading sideways till 1600 UTC on June 11, when the recent surge began, albeit in two cycles.

As a result, the coin surged to $0.089 that ultimately settled in $0.093, at press time. Since the surge began, the cryptocurrency added over 19.2 percent in less than 24 hours. Moreover, the market capitalization of the cryptocurrency rose by over $400 million over the same time period, and stood at $2.42. The exchange accounting for highest ADA volume was Huobi Global, taking 22.19 percent of volume in the pair ADA/USDT. However, the highest ranking exchange with “real” volume was Binance on the third spot, holding 9.9 percent of the global volume.

Given this massive, swift and deviating price surge, an ADA breakout is imminent. As charted out by GalaxyBTC, a self-described “Cryptocurrency accumulation machine,” ADA is poised for yet another bullish rise. Looking at the ADA/BTC chart in terms of 4-hour price change, a key breakout point has been surpassed, which could mimic a past breakout that took ADA to 0.0000191 BTC. To put that figure into context, the current price of ADA in BTC is 0.0000111.

The recent rally broke the same “breakout + retest” line as it did three months ago and if this continues, the price could skyrocket to the aforementioned BTC expressed price of 0.0000191. In terms of value, ADA was priced at $0.098, its highest price since September 2018.

From a year to date [YTD] approach, this rising peak will be the cryptocurrency’s fifth peak in the year, although the first notable rise was seen only in April. The second peak saw the coin briefly pass the April high. However, it dropped soon enough. Following this, two close-quartered peaks were seen in late May at $0.095 and $0.097, which then led to June’s rise, which is speculated to peter out prior to reaching $0.1.