The end of June marked the closing of the second quarter of 2020. As such, the popular cryptocurrency monitoring company Skew explored various aspects of Bitcoin’s performance during that period.

After the negative Q1 this year, in which the primary cryptocurrency lost 10% of its value, despite plunging by 50% in mid-March, the asset has shown massive gains of over 42% in Q2. 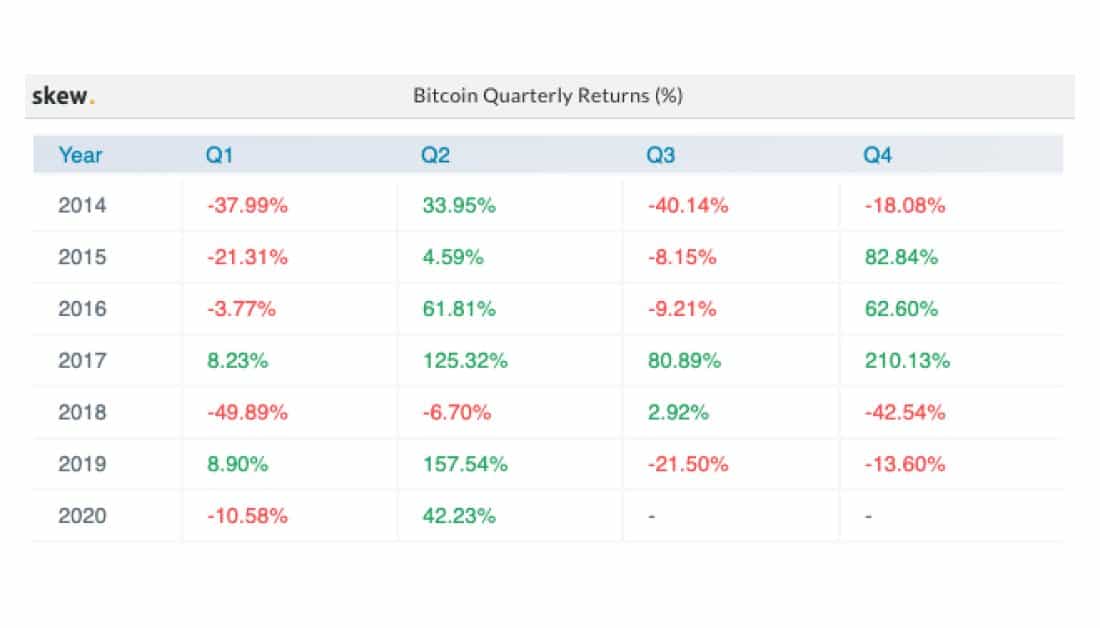 Bitcoin Quarterly Results. Source: SkewThus, Q2 continues to be Bitcoin’s favorite yearly quarter. As CryptoPotato reported before, the largest cryptocurrency has marked increases throughout almost all Q2s since 2014. The only exception came during the 2018 bear market when BTC lost 6.7% of its value in the second quarter.

The increase of 42.23% means in USD terms that Bitcoin has surged from $6,420 at the end of Q1 to $9,140 at the end of Q2. According to Skew, this rather impressive number means that BTC had its “third-best quarterly close in its young history.”

The two occasions in which Bitcoin had demonstrated higher closing prices were during the parabolic price increase of 2017 when it ended at $13,660 and in the bull market of last year when it was at $10,590 after Q2.

The data analytics company also analyzed the performance of several assets since the start of the year. Aside from Bitcoin, those included gold, the S&P 500 index, the US dollar, and crude oil (WTI).

WTI has been on a significant downtrend since the COVID-19 pandemic caused nation-wide lockdowns. At one point, it even went in negative territory as its supply was substantially higher than the demand. Although it managed to recover to some extent since then, it still shows -34.22 YTD results.

The S&P is also down with -4.04%, per the data from Skew. The USD is up by 5.41%, which may be somewhat surprising to some after printing trillions of dollars to flush into the markets and the economy in an attempt to fight the financial crisis. However, it’s worth noting that numerous prominent economists have warned that the dollar’s long-term effects could be quite damaging.

Gold, on the other hand, being traditionally regarded as a safe-haven asset prone to perform well during a crisis, has indeed increased its value in 2020. The bullion is up 16.26%.

Out of all examined assets, however, the one that stands out with the highest gains so far in 2020 is Bitcoin. BTC marks a 6-month increase of 27.31%. Interestingly, the primary cryptocurrency was also the best performing asset of the past decade, with an ROI of 8,900,000%.