The Bitcoin SV saga has been one of the highlights of January 2020.

After the collective market went on a bullish run in the second week of January, the controversial Bitcoin SV registered a hike of close to 300 percent, taking its valuation from $116 to $457 in a span of 4 days. In fact, Bitcoin SV managed to oust Bitcoin Cash in the process, taking over 4th place in the rankings for a brief period.

As previously reported, many people have speculated that the aforementioned surge took place after reports claiming that Craig S. Wright had gotten access to the Genesis wallet surfaced.

However, according to a recent report by Amun Research, one shared with AMBCrypto, the spike may have been due to network fundamentals.

Bitcoin SV came into existence after it forked back in 2018. The research report suggested that the spike could have been due to this reason, for it is likely that a majority of the holders did not have access to the holdings or never claimed them in the first place. The report also highlighted the possibility that newly-minted BSV tokens may have gone to only a few addresses since it lacked any competitive mining.

According to the attached chart, it can be observed that more than 50 percent of the mining segments in Bitcoin SV fall under the ‘unknown’ category, highlighting the lack of competition.

Since blockchains are transparent, it is possible to estimate the average time investors have held onto Bitcoin and BSV, before facilitating a transaction. A metric used by Amun research was ‘Dormancy,’ and it was used to measure the holding habits of BSV investors who see BSV as an asset. 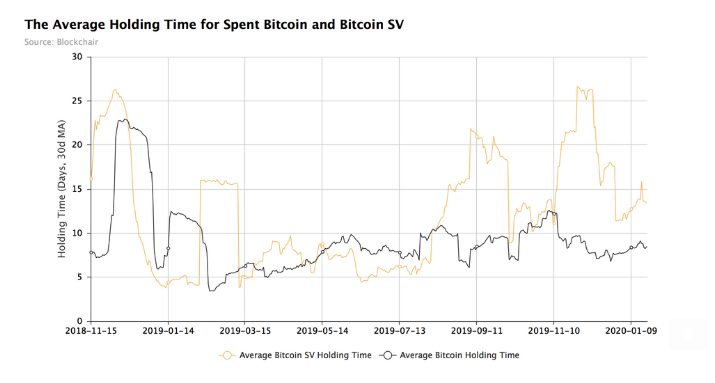 The chart above compared the holding periods of Bitcoin and Bitcoin SV by their respective investors and it was observed that BSV was held for a longer time than BTC, on an average of 13 days compared to Bitcoin’s 8 days. The report added,

“All things being equal, the higher the dormancy the older coins are being transacted on that day for BSV than BTC, which in turn means that longer-term investors of BSV are releasing their coins into circulation at a higher rate than that of BTC currently.”

Hence, the report hypothesized, it is clear that older holders of BSV who had BTC before the fork in November 2018 “may not even have access to the asset anymore, or if they did will have likely sold their holdings by now.”

The research report concluded by stating that if BSV’s rise was due to miners who acquired these BSV coins, the market is unlikely to maintain a high position in terms of market cap, with the same eventually slumping down to its pre-January 2020 valuation.