Bitcoin Satoshi Vision (BSV) is celebrating its first anniversary since gaining independence from the Bitcoin network. Despite the celebratory mood across the community, BSV/USD market has gradually turned red forming a death cross on the daily candle charts price signaling a possible drop towards the resistance levels at $110 in the coming days.

Bitcoin SV celebrates the first anniversary amidst a cloud of red

The BSV community is celebrating its first anniversary since the controversial split from Bitcoin that saw the chain compete for hash power with Bitcoin Cash (BCHABC), another fork of Bitcoin. After years of battling between BCH and BTC developers, BSV finally forked from Bitcoin main chain on 15 November, sparking the first ever public hash war on Bitcoin.

With the manifesto of bringing back the original blockchain envisioned by Bitcoin’s creator, Bitcoin SV further offers a scalable platform “as Satoshi planned.”

However, the celebrations have failed to spark up the price as bears took control of the market after the price tested the resistance level at $145 pushing down the price to an intraday low of $119.

Looking at the daily charts, BSV/USD price is set to test lower support levels as the SMA 50 crossed above the SMA 200 line confirming a death cross on the pair. The indicator signals an upcoming bearish reversal on the pair currently trading at $123.11 USD. BSV/USD bears look set to gain control of the market to push the price towards the $120, $112 and $100 support levels. 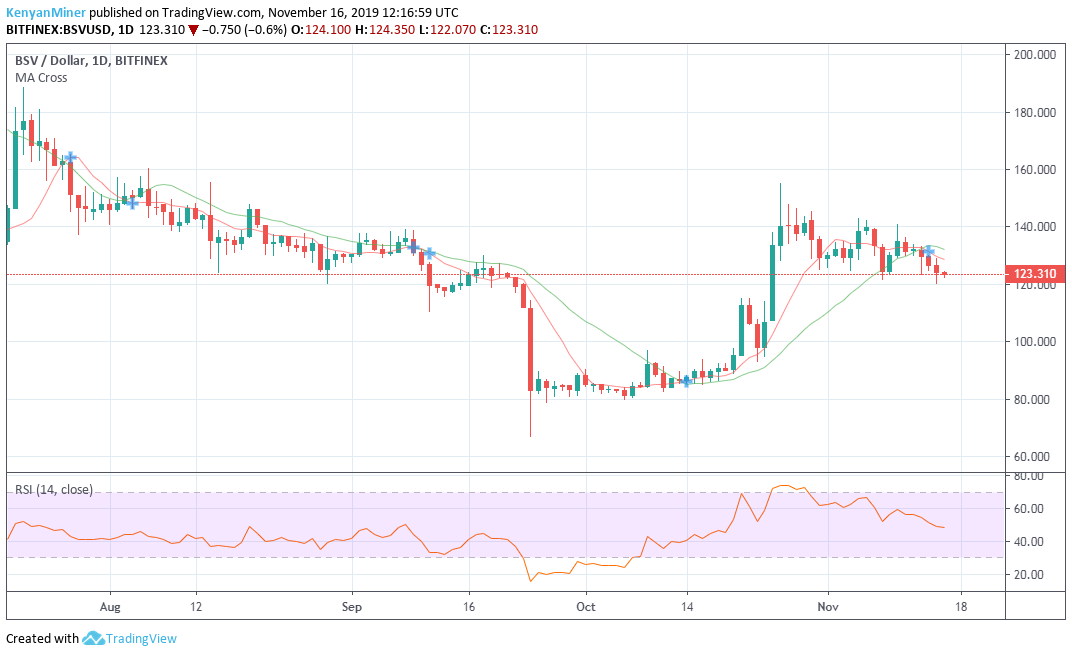 Seller pressure intensifies in the BSV market as witnessed on the free fall of the relative strength index (RSI) oscillator pointing towards oversold levels. BTC ‘s abysmal performance against the green back in the past few days does not paint a rosy picture for the coin that very much follows the pioneer coin’s price.

A bullish flag pattern forms on the daily candle charts and closes below the flag’s support level spells doom for the BSV/USD bulls and may see the price drop towards the major support level at $79.00.