Bitcoin and Ethereum are two of the world’s largest cryptocurrencies by market cap and several BTC-backed ERC20 tokens have continued to increase and thrive on Bitcoin’s rival network.

Over the past couple of years, the market for Bitcoin on the Ethereum network has grown significantly, and currently, the latter has become one of the most popular off-chain destinations for Bitcoin. According to the data compiled by Dune Analytics, more than 11,ooo BTC, which is essentially over 0.05% of the total BTC supply, is now on Ethereum.

DeFi has become one of the biggest trends in the industry lately. This has led to a cross-chain phenomenon that has gained significant traction over the past couple of months. The industry also saw the efforts to inject Bitcoin into the decentralized finance or DeFi – a space that has been a space for developers to build decentralized financial applications on the Ethereum network. This is essentially done by creating a Bitcoin-collateralized ERC-20 token pegged to the market value of Bitcoin.

Some of the well-known projects are wBTC [Wrapped Bitcoin], imBTC [TokenIon], tBTC [Keep Network], sBTC [Synthetix], renBTC [Ren], and pBTC [ptokens]. This signaled the increasing sentiment as Bitcoin being the collateral of choice. 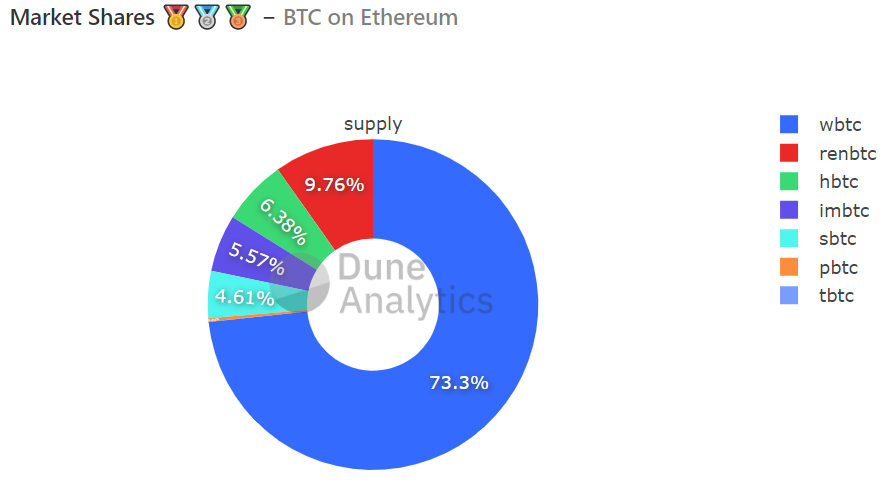 Interestingly, out of the total Bitcoin supply that currently existed on the Ethereum network, 73.3% of it was Wrapped Bitcoin [wBTC] which is backed 1:1 by Bitcoin. Followed by RenBTC and hBTC among others.

Similar to these tokenized Bitcoin protocols, the implementation of Lightning Network as well as Blockstream’s Liquid Network also aimed at bolstering the coin’s ability. However, there was a growing interest in using Bitcoin on other blockchains and this was evident from the fact that these versions of tokenized Bitcoins have outpaced popular off-chain solutions.

Increasing Bitcoins on the Ethereum network was catalyzed by the increasing supply of RenBTC. The collaboration between Synthetix and Ren Protocol as well as BitGo to create incentivized Bitcoin liquidity is a significant catalyst in terms of solidifying Bitcoin’s position on the Ethereum network. In addition, the synthetic version of Bitcoin, since it is backed by the coin itself, is less volatile when compared to other forms of collateral in DeFi.

The rise in supply of BTC on its rival network essentially signaled that there is an increasing interest in building more advanced tech that might not be achievable on the Bitcoin blockchain, at the moment. This further gave an insight as to the growing popularity of Bitcoin in general and user sentiment with the growing Bitcoin exposure strengthening a macro bullish outlook.