Major Bitcoin mining machine manufacturer, Bitmain Technologies has announced the suspension of the global sales of its Antminers. The move was unveiled via the company’s official WeChat account platform and comes following the Chinese government’s plan to clamp down on local mining operations.

The past days have seen an exodus of Chinese mining machines as miners look to other safe-haven regions to escape the wrath of the government. While this is not the first time the Chinese government has threatened to suspend or ban mining operations on energy and environmental concerns, the move this time represents the first time real enforcement of the ban is being effected.

The suspension of the sales of its Antminers was to help its local customers and partners offload their second-hand machines and decongest the country in due time.

“In order to help the industry transition smoothly, Ant Mining decided to temporarily suspend the global spot sales,” Bitmain revealed in the announcement according to a Google translation of the post. The development of Bitmain is inseparable from the support of our customers. We adhere to the values ​​of “long-term, loyal, and win-win”, and strive to cope with every change and fluctuation in the industry together with our partners.” 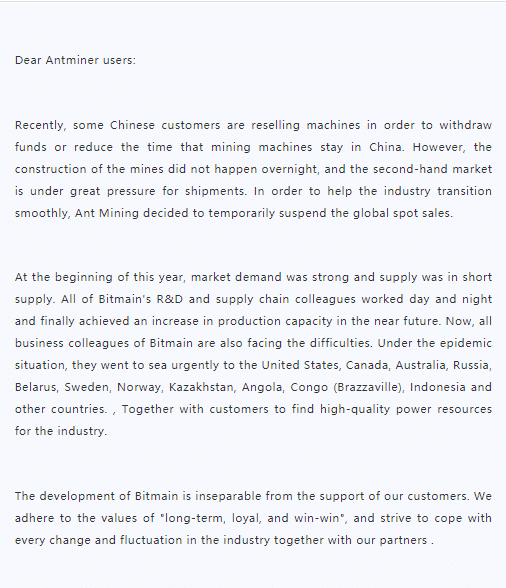 Chinese Mining Exodus is Good for the Industry

Mining firms that once made China their homes are now moving to other countries like Kazakhstan, and the United States. Amongst the major ones include New York Stock Exchange-listed BIT Mining and Canaan Inc. There are a number of advantages that have been identified with the exodus of miners from China.

The first and most important is the decentralization of Bitcoin and general crypto mining operations. Prior to this time, a large percentage of the total Bitcoin hashrate was domiciled in Chinese mining provinces. This usually predisposes the entire network and industry to risks of regulatory clampdown as we are currently seeing today.

Additionally, the move away from China on energy and environmental concerns can accelerate the embrace of alternative or renewable mining systems. The gap in embracing new power sources for mining can attract new investors into the space, and help usher in green mining. In all, the dominance of China in controlling Bitcoin mining operations will be tapered down, and help stabilize the ecosystem as a whole.

Benjamin Godfrey is a blockchain enthusiast and journalists who relish writing about the real life applications of blockchain technology and innovations to drive general acceptance and worldwide integration of the emerging technology. His desires to educate people about cryptocurrencies inspires his contributions to renowned blockchain based media and sites. Benjamin Godfrey is a lover of sports and agriculture. Follow him on Twitter, Linkedin