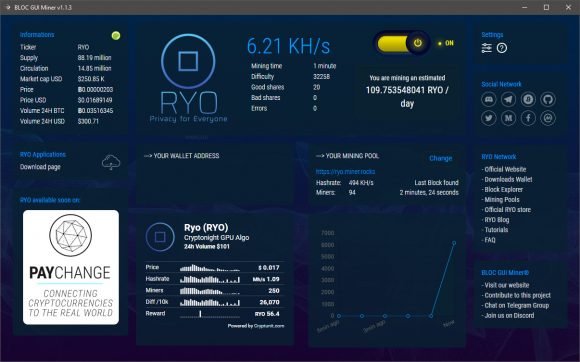 The BLOC GUI Miner is a beautiful, easy to use, Graphical User Interface (GUI) for mining some of the more popular cryptocurrencies based on Cryptonote vailable for Linux, Windows and MacOS. The project is being developed by Bloc.Money (BLOC) (CryptoNight Heavy-Haven algorithm), so by default it starts by offering you to create a BLOC wallet if you do not yet have one, or mine BLOC if you do, but you also have another option to mine for other supported CryptoNote/CryptoNight crypto coins. Besides BLOC, you can also mine: RYO (RYO), Haven (XHV), Monero (XMR), Conceal Network (CCX), Sumokoin (SUMO), GRAFT (GRFT), Quantum Resistant Ledger (QRL), Lethean (LTHN), X-CASH (XCASH), Masari (MSR), Tube (TUBE), AEON (AEON), ArQmA (ARQ), Iridium (IRD), TurtleCoin (TRTL) and Loki (LOKI) with this miner. You start by choosing the coin to mine, entering your wallet address and then selecting a pool where you want to mine from a list and then you are presented with a nice looking GUI with information about the coin you are mining and your hashrate. You can use the settings button to change things such as your wallet ot mining pool as well as if you are CPU or GPU mining (depending on the version of the GUI you use).

There are two main versions of the GUI miner, one using XMRig as a backend for the mining that supports only CPU mining and one tha uses XMR-Stak that supports both CPU and GPU mining (AMD OpenCL and Nvidia CUDA). Since they use different miners there is slight difference in the supported coins between the two versions: TurtleCoin (TRTL) and Loki (LOKI) are supported only on the XMRig version and Conceal Network (CCX) only on the XMR-Stak one, so have that in mind when choosing. Of course it also depends if you need the CPU only or the CPU and GPU version of the GUI miner, though have in mind that apparently the CPU/GPU version does not support mining on both at the same time and you may need to manually switch between CPU and GPU (CPU mining by default). Do note that the XMRig version supports LOKI as it is the only miner with support for RandomX CPU mining and LOKI uses a variant of the RandomX algorithm (RandomXL). We are hoping to see more RandomX crypto coins getting supported in this easy to use GUI miner as they become available in time as it really makes mining on CPU easy for people new to mining especially with CPU mining getting popular again.