Many of the market’s altcoins have been noting steady and marked growth on the charts over the past few days. However, such a price appreciation, unusually, was not led by Bitcoin, with the king coin moving sideways lately while facing a lot of bearish pressure. 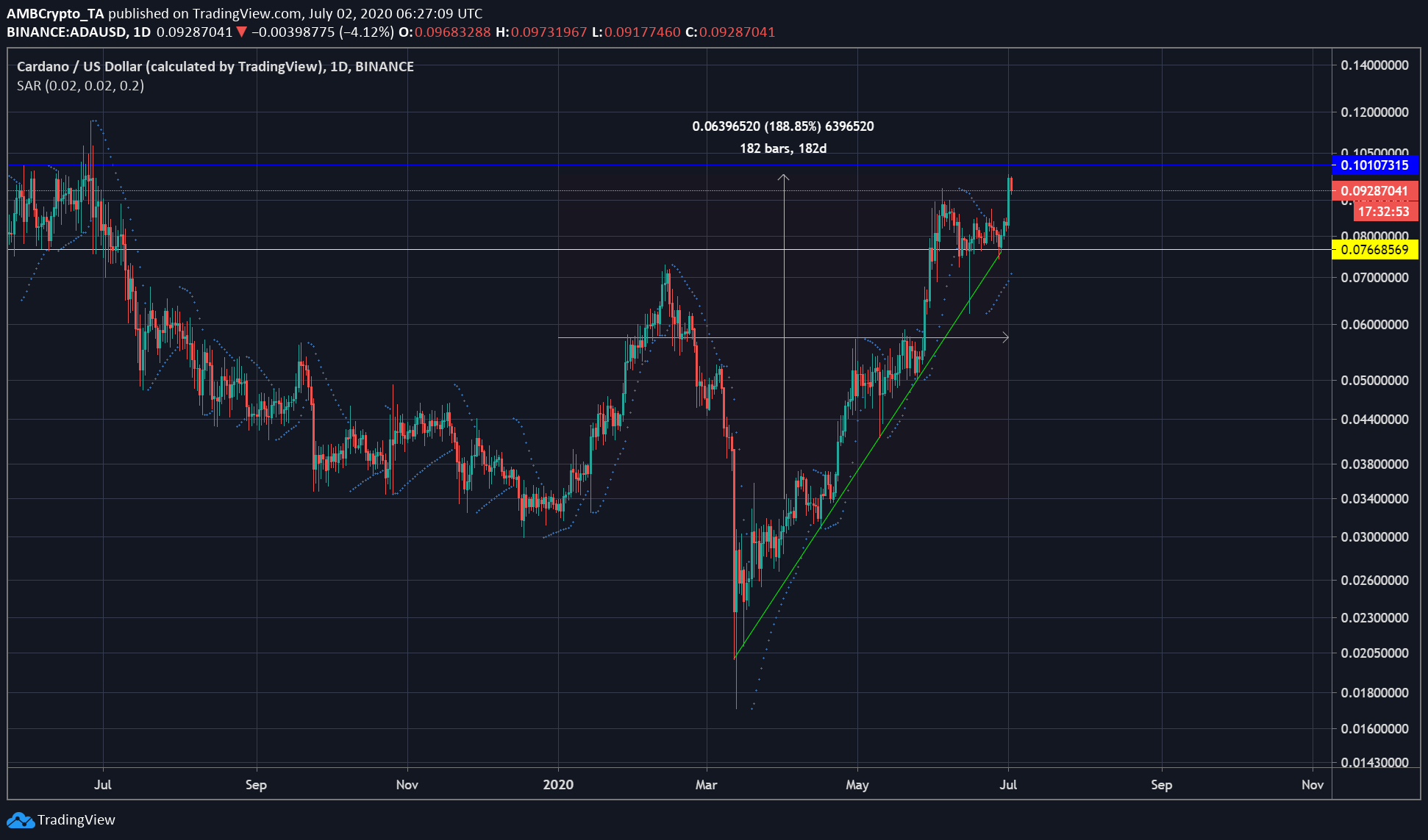 The sharpest performer among the top cryptocurrencies was Cardano [ADA]. The ninth-largest coin on CoinMarketCap’s list managed to return 188.85% in profits to its investors in YTD. ADA recorded a great surge yesterday and it has since been registering spurts of growth on the charts.

This bullishness in the market has to do with the progress made by the ecosystem towards the Shelley upgrade. With the Shelly hardfork scheduled for later in the month, Cardano released the Shelley-complete node on the mainnet yesterday.

This definitely garnered support from the Cardano community, with the coin on a bullish path for the past few days. According to the Parabolic SAR, the coin’s price trend changed a few days back. The dotted markers aligned under the price candles, highlighting an upward price move while also pointing to bullishness in the market.

The mid-cap asset, IOTA, has been returning nearly 42% in YTD to investors and has remained a better performing asset than most major cryptocurrencies. In fact, at the time of writing, IOTA was noting great bullish momentum after registering six consecutive green candles on the charts. At press time, the price of IOTA was $0.2341, with the support remaining at the base of the sixth green candle at $0.2008, while resistance was still at $0.2562.

This bullishness in the market was confirmed by the Bollinger Bands. The Bollinger Bands appeared to be opening up, indicating that there might be some volatility in the IOTA market; however, the signal line had snuck under the price candles, underlining the bullish behavior of the market.

This growing momentum could be associated with Wednesday’s announcement of a “coordinator-less” network, the IOTA 2.0 plan to rival smart-contract platforms like Ethereum, EOS, Tron, and Cardano.

Another mid-cap asset, Dash has been outperforming many large-cap assets with a return of 62.64% in YTD. The coin’s price was moving sideways over the past few days and was trading at $67.79, at the time of writing, close to its immediate support at $65.94. The immediate resistance remained as high as $77.04.

Despite the fight put up by the market, however, it had lost some momentum as the Awesome Oscillator was dipping into negative territory.

This suggested that short-term momentum had fallen faster than the long-term momentum in the market, representing a bearish selling opportunity.