Elon Musk has seemingly not completely forgotten about Dogecoin, as some may have feared. DOGE spiked more than 10% after the billionaire updated his Twitter picture to show that he still supports the cryptocurrency.

Musk’s new profile picture is a head shot of him with DOGE reflections on his sunglasses, similar to that of Bitcoin’s Laser eyes meme which trended across Crypto Twitter in February.

This single action from the Tesla CEO saw the price of the meme-coin move from $0.18 to above $0.203 overnight. However, the cryptocurrency has retraced and is currently trading at $0.183. 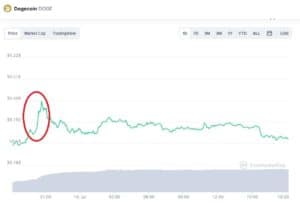 Dogecoin is down more than 75% from its all-time high (ATH) of $0.7376 recorded in May. The massive drop forced desperate investors to beg the billionaire to help push the price upward by tweeting something positive about the coin like he has done several times in the past.

However, the Tesla boss kept a low profile until he was ready to do his thing earlier this month. On July 1, Musk tweeted about Baby Doge, one of the latest Dogecoin copycats, and within minutes, the price of the cryptocurrency gained 90%.

From Musk’s endorsement, the newly launched meme coin got off to a good start. American auto racing sanctioning and operating company NASCAR even went on to brand the Baby Doge symbol on one of its cars.

Meanwhile, Dogecoin co-creator Jackson Palmer isn’t happy with the crypto industry despite his legendary status in the space.  Last week, Palmer started a controversial discussion on Crypto Twitter that stirred up different reactions.

The DOGE co-founder believes almost everything is wrong with crypto right down to the concept of decentralization. He sees crypto as a right-wing tool that gives more profits to the wealthy without government restrictions.

According to Palmer,  money is always political, decentralization is an illusion, and the crypto industry is controlled by a “powerful cartel of wealthy figures.”