Programmatic Proof-of-Work aka ProgPoW, the most controversial proposed implementation of Ethereum, made a short appearance in the Ethereum Classic community. ProgPoW and SHA-3 were the proposals submitted for changing Ethereum Classic’s mining algorithm.

The discussion on the change of Proof-of-Work mining algorithm was held on November 22, 2019, with the other topics in the agenda being change of mining limits, or to maintain the current status quo.

While the Ethereum community wants to shift the existing PoW mining algorithm with the intent to make mining egalitarian, Ethereum Classic is moving away from Ethhash as the algorithm was first introduced as a temporary stay on Ethereum till proof-of-stake.

Since the DAO hack, which resulted in a chain split creating Ethereum Classic and Ethereum, the latter still leads in terms of majority chain, even though Ethereum Classic is often dubbed as the original Ethereum as it continued on the old chain. This, in turn, makes Ethereum Classic susceptible to a 51 percent attack even by mid-sized mining pools.

On one hand, ProgPoW, a protocol proposed by IfDefElse, would be a GPU-extension of the current Ethash. The protocol aims to reduce the control of ASIC mining on the network by making graphic card mining more competitive.

On the other hand, SHA-3 proposal was made by taking into consideration the 51 percent attack suffered by the leading smart contract platform earlier this year.

At the beginning of the year, SlowMist, a Chinese blockchain security firm, was the first to raise alarm on the attack, with the security firm concluding that a private mining pool had managed to take control of over 51% of the total network hash rate.

A follow-up blog post by Coinbase revealed that the exchange had initially discovered that the attacker had managed to double-spend around 88,500 ETC. On further investigation, the exchange also found that there were 12 other attacks that “included double spends, totaling 219,500 ETC,” then amounting to $1.1 million.

In the SHA-3 proposal for Ethereum Classic on GitHub, the motivation behind this was stated to be:

“A response to the recent double-spend attacks against Ethereum Classic. Most of this hashpower was rented or came from other chains, specifically Ethereum [ETH]. A seperate proof of work algorithm would encourage the development of a specialized Ethereum Classic mining community, and blunt the ability for attackers to purchase mercenary hash power on the open-market.”

The GitHub post also cited the benefits of SHA-3 on smart contracts and dApps as another reason for changing the proof-of-work algorithm. Similarity to Bitcoin and value to smart contract developers were also listed as the additional rationale behind the move.

While Ethereum has been on the fence regarding ProgPow’s implementation for a while now, the Classic community, however, seem to have made up their mind. The majority sentiment of the ETC community is a definite no-now to ProgPow.

“Moving ECIP-1070: ProgPoW on ETC to Rejected Status with the agreement that someone who wants to champion this proposal can do so on a new ECIP in the future.”

The reason behind this rejection are several, but at the center of it all stands the team behind the proposed protocol: IfDefElse and Kristy-Leigh Minehan. The difference in the worldview even resulted in the Minehan being uninvited from the ETC Summit, with the problem being her connection to Craig Wright and associates. A blog post by Bob Summerwill, ETC Cooperative’s executive director, painted the entire picture. He had said,

“I withdrew her invitation after finding about about connections between herself, Core Scientific and Craig Wright, Calvin Ayre and Coingeek […] Kristy has also spoken at Coingeek events on at least two occasions, implicitly promoting and validating them.”

This aside, Summerwill had also expressed concerns about “potential future lawsuits” with regard to patent claims, trademarks or copyright claims. The lawsuit concern was brought up as there were anonymous developers behind IfDefElse who were not willing to sign Contributor Licensing Agreements [CLAs].

He had also stated,

“I have to view ProgPoW as a serious risk to any project which adopts it, and would urge the Ethereum community to strongly reconsider whether it is wise to proceed unless significantly stronger guarantees can be given around the IP.”

Yaz Khoury, Director of Developer Advocacy at ETC Cooperative, immediately proposed to reject the protocol, further stating “we should send a clear signal to ETH, and reject it.” However, this was immediately met with the disagreement of Gregory Markou, co-founder and VP Engineer at ChainSafe System. Markou pointed out that “upstream clients have it, so we should consider it at least.” Nevertheless, the final decision surrounding ProgPoW for ETC was still a huge no. 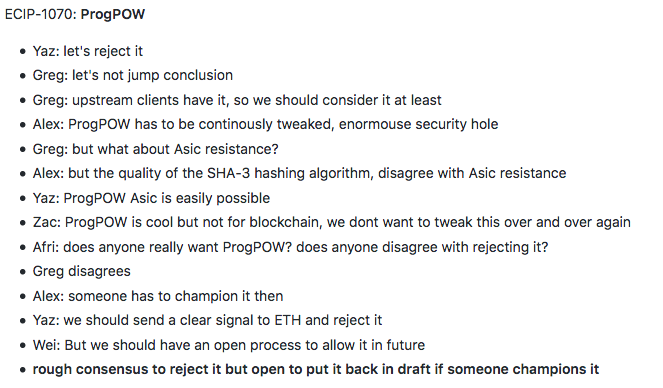 On one hand, ProgPoW is clearly out of the box, on the other hand, the shift to Keccack-256 does not seem to be as easy as reciting the alphabet. While SHA-3 garnered more support than ProgPoW, there were some developers in the community who raised concerns about its implementation. 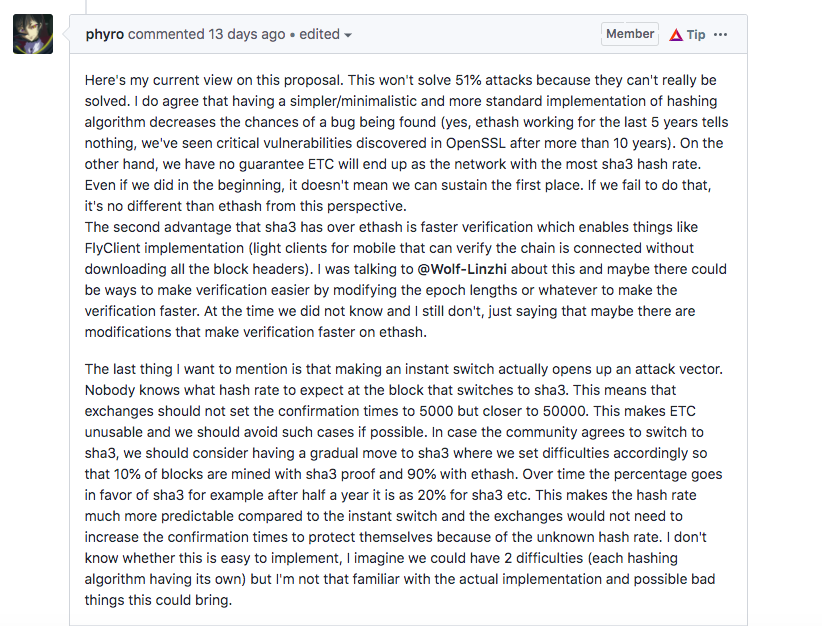 During the discussion, it was Stev, stated that there had to be “more research and data” on SHA-3, in order to be sure that it would not be susceptible to a 51 percent attack. This aside, questions surrounding ASIC on the network were also brought up during the session. 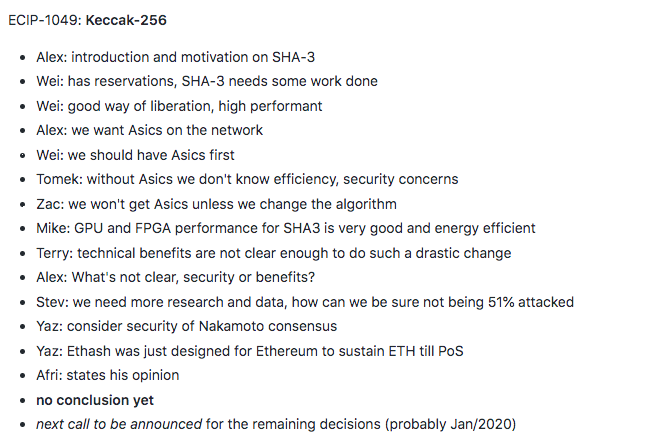 Addressing the concerns of the Ethereum Classic community, Alex Tsankov, an Ethereum Classic developer working on the SHA-3 mining algorithm, told AMBCrypto that, at present, SHA-3 was the “safest hashing algorithm in the world,” adding that it has the highest performance and good resistance to quantum computers, which has been proven by cryptographers.

With regard to ASICs on the network, he stated that the team had “confirmation from ASIC manufacturers Bitmain and Epic blockchain, as well as atom miner, fusion silicon that they will make SHA3 miners for ETC.” Tsankov said,

“ETC has daily issuance of around $100,000 a day of new tokens, this is almost $33 million a year which makes it very attractive for new manufactures to build ASICS. So I am not worried there are already SHA3 ASICS on the market for very small coins. It is very easy to build a SHA3 ASIC, even easier than it is to build SHA2 bitcoin ASIC, many manufacturers will be able to participate and there are open plans online.”

While SHA-3 has gained majority support in the community, its future with Ethereum Classic will most likely be clear during the next meeting on the subject, which is likely to take place early next year.