It’s safe to say that July has been relatively dull for Bitcoin when it comes to price action. The major cryptocurrency spent the last week trading in a range between $9,100 and $9,400 without any major fluctuations.

It’s also worth noting that legacy markets and Bitcoin’s price remain aggressively correlated. In fact, a lot of analysts on Twitter are now saying that currently, the futures on stock markets are a valuable indicator of where Bitcoin will head next.

The most recent example came yesterday when BTC price dropped to $9,050 just as global stock markets tumbled at their opening hours. Yet, one of the major indices, the Nasdaq Composite, continues to chart new highs daily, despite the ongoing crisis with the COVID-19 outbreak.

And while Bitcoin failed to provide any thrilling actions this week, the same can’t be said for alternative cryptocurrencies. A lot of them exploded in price as the march was led by the well-known and popular meme coin – Dogecoin. Largely induced by TikTok influencers prompting their followers to buy it, DOGE surged by more than 100% in less than a couple of days.

Another altcoin that marked notable gains and even painted fresh all-time high values was Chainlink (LINK). This happened right after China’s Blockchain Service Network launched, having integrated Chainlink’s price oracles into its ecosystem. Today, the spotlight was stolen by Elrond (ERD), as the altcoin popped by about 50% in the last 24 hours.

It goes without saying that DeFi was again at the forefront as related cryptocurrencies were soaring all along.

In any case, Bitcoin’s total market share measured through the dominance index declined by almost 2%. This means that altcoins are breaking new grounds, and there might be an altcoin season in the making. 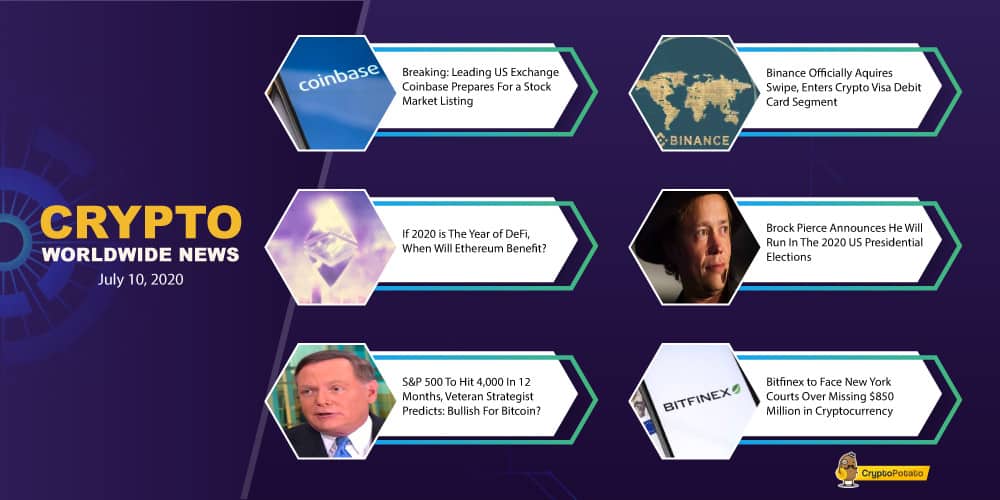 Leading US Exchange Coinbase Prepares For a Stock Market Listing. According to a new report, the leading US-based cryptocurrency exchange, Coinbase, has initiated preparations for a public listing on the stock market. The document informs that this might happen as soon as this year.

If 2020 is The Year of DeFi When Will Ethereum Benefit? There is absolutely no doubt that the hottest trend in the cryptocurrency industry at the moment is decentralized finance. Yet, Ethereum, despite being its foundation, still hasn’t caught up. It’s necessary for the network’s scaling solutions to be rolled out in order for ETH to start catching up.

S&P 500 To Hit 4,000 In 12 Months, Veteran Strategist Predicts: Bullish For Bitcoin? Despite the fact that the COVID-19 outbreak continues and the daily number of cases is rocketing, the veteran market strategist Jeff Saut believes that the S&P 500 will reach 4,000 basis points in the next 12 months. The question is if this is bullish for Bitcoin as well.

Brock Pierce Announces He Will Run In The 2020 US Presidential Elections. Brock Pierce, a figure well-known within the cryptocurrency community for his involvement in the biggest ICO – EOS, and the largest stablecoin issuer Tether, has announced his intentions to run in the 2020 US Presidential Elections. He will be running as an independent candidate according to the official release.

Bitfinex to Face New York Courts Over Missing $850 Million in Cryptocurrency Funds. One of the largest cryptocurrency exchanges, Bitfinex, will have to face New York courts in a case filed last year by the New York Attorney General – Letitia James. It’s alleged that the company hid a loss of more than $850 million in client and corporate funds.

This week we have a chart analysis of Bitcoin, Ethereum, Ripple, Cardano, and Dogecoin – click here for the full price analysis.