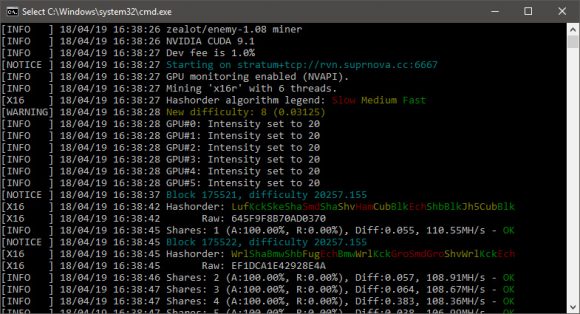 The new zealot/enemy (z-enemy) Nvidia GPU miner for mining Ravencoin (RVN) X16r has been just updated to version 1.08 bringing some nice improvements. The new z-enemy version 1.08 comes with kernels speed improvements for GTX 1080 Ti that can bump the hashrate with +10% total according to the developer, the new version also comes with support for the slightly different X16S algorithm used by Pigeoncoin (PGN) along with some minor fixes. The update also introduces support for two more different algorithms – Bitcore (BTX) and Phi1612 used by LUXCoin, so you can test them as well as they might be faster than the miner you might be already using for them as well. The new release should also be more stable when it comes to huger power levels and overclocking as well, so you might also try to push your Nvidia GPUs a bit more to see if they will handle it.

The z-enemy-1.08 requires CUDA 9.0 support, so make sure you have up to date Nvidia video drivers that bring support for it. We are also reminding you that the z-enemy is a closed source miner available only as a binary release (Windows binary for the new version 1.08 for the moment) and the miner also has a 1% built-in developer fee in order to support the further development. If you are not Ok with that, there are a host of other open source alternatives available as Nvidia GPU miners for X16 and X16S that you might use, though with the latest update the z-enemy-1.08 should be the fastest for sure, so you might want to give it a try… we are already seeing a nice improvement over the old 1.05a version.