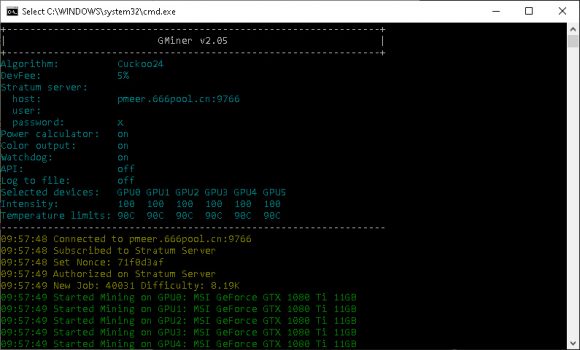 The latest GMiner 2.05 Nvidia and AMD GPU miner continues improving the recently added Qitmeer (PMEER) support that proved to have quite big demand for CPU power initially. The previous version 2.04 of the miner has improved the situation a bit with the introduction of an additional parameter to reduce CPU load, but the latest update does this even better. The CPU usage has been decreased significantly and should now be fine for GPU mining rigs with lower-end processors mining Qitmeer (PMEER), and there is also a significant performance improvement of up to 30% over what was already available. The only thing that you might not like that much yet is the remaining higher 5% dev fee for that particular algorithm that the miner still has compared to the regular 2% for other algorithms.

The GMiner miner software was originally only an Nvidia GPU miner, although some algorithms are already supported on AMD GPUs as well. Do note that GMiner is a closed source miner for Nvidia and AMD GPUs with binaries available for both Windows and Linux, there is a 2% developer fee built-in the software.

– To download and try the latest release of the Gminer v2.05 Nvidia and AMD GPU miner…