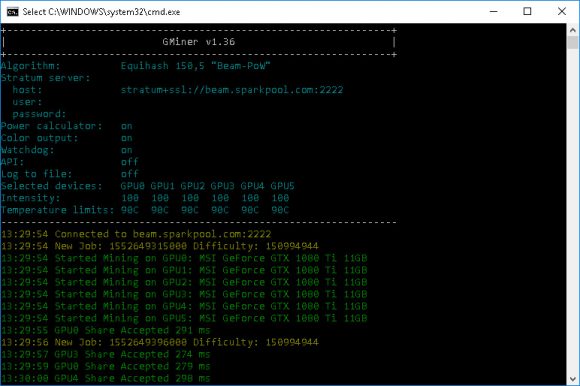 The latest GMiner 1.36 miner comes with significantly decreased CPU usage for cuckoo cycle algorithms for Nvidia GPUs (up to 40%), so it should handle better on mining rigs with lower-end CPUs. The new version also has added adaptive CPU usage adjustment for cuckoo cycle algorithms (increase hashrate on weak CPUs), do note that the miner need a few minutes to adapt CPU usage on a weak CPU. There is also an added option to control the GPU intensity (--intensity, 1-100) with the default intensity being 100, but lowering it may be useful for some mining rigs that have stability problems with the highest intensity.

The GMiner miner requires an Nvidia GPU with CUDA compute capability 5.0 or later as well as CUDA 9.0 driver support, some algorithms are already supported on AMD GPUs as well (Cuckaroo29, Cuckoo29, Cuckaroo29s and Beam’s Equihash 150,5). Do note that GMiner is a closed source miner for Nvidia and AMD GPUs with binaries available for both Windows and Linux, also there is a 2% developer fee built-in the software.

– To download and try the latest release of the Gminer v1.36 CUDA Equihash miner…