Mirroring previous upswings, Bitcoin’s [BTC] bullish rise isn’t looking to slow down anytime soon. Notably, some coins have failed to join the party. The most significant coin among them, XRP.

In 2019, the second largest altcoin in the market saw a slump against the price of Bitcoin, owing to the growing dominance and price push of the king coin.

For the first time in 2019, the XRP/BTC chart showed positive signs as the altcoin took the baton from the king coin to spearhead the latest market surge. As can be seen from the below chart, XRP took off on 14 May, following seven consecutive red-marred candles.

Owing to the announcement by Coinbase regarding XRP trading for New Yorkers, coinciding with the forever-bullish Consensus conference, XRP saw a massive +30 percent rise, even seeing a mammoth 6 percent hourly price gain on 15 May. 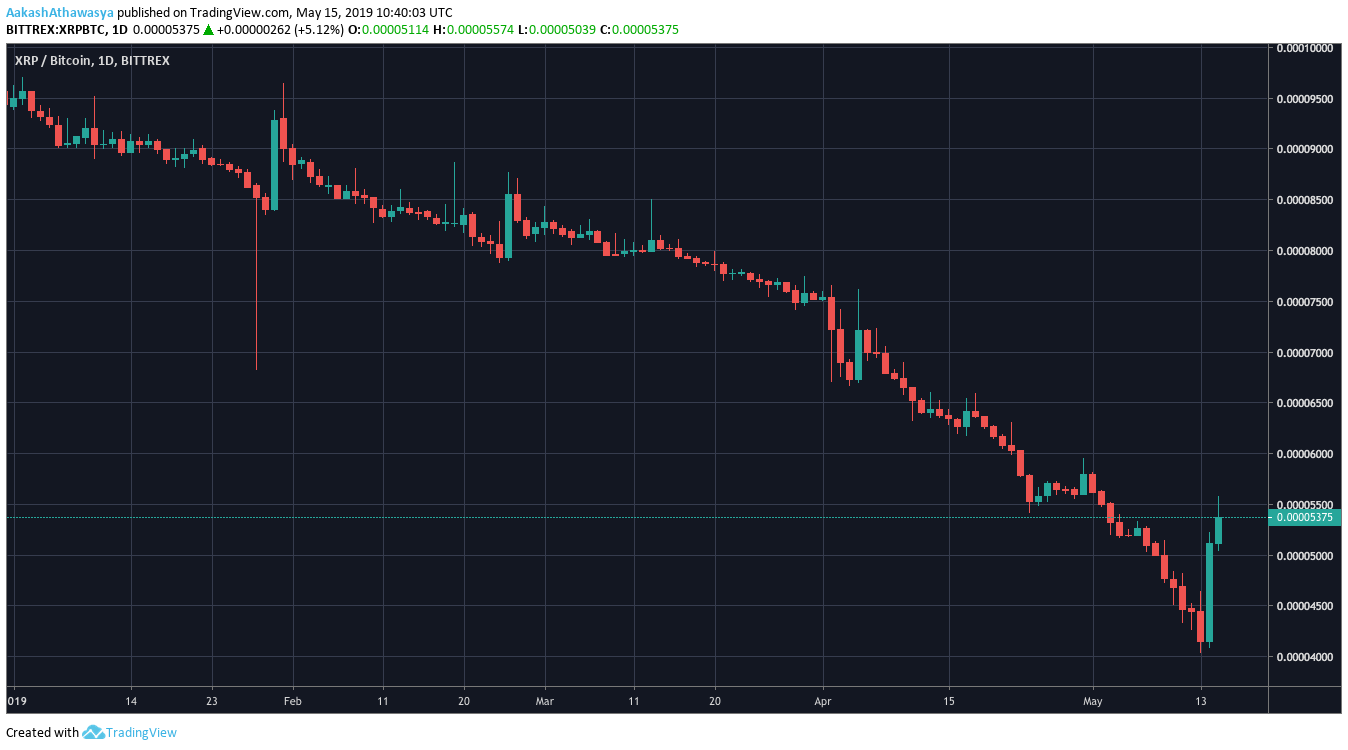 However, despite current trends showing positive returns for the Ripple-controlled virtual currency, its performance against Bitcoin is contrary to previous years.

As a recent report from Longhash pointed out, XRP has “lost nearly half of its bitcoin-denominated value,” in 2019 alone. Citing Trading View, the crypto-analytics firm stated that XRP rose by a whopping 1600 percent against the king coin in 2017, despite BTC nearing $20,000 later in the year.

The next two years were not so fruitful for the altcoin though. In 2018, the price of XRP, in terms of BTC, dropped by 14.5 percent and with just five months into 2019, XRP has already plummeted by 46.6 percent.

Since Coinbase reigned in the XRP bulls thanks to an overdue listing on the exchange, the XRP market has been fairly quiet. Longhash stated that since the Coinbase listing, the price of XRP against BTC has “plummeted.”

The Nasdaq XRP Liquid Index announcement in partnership with Brave New Coin is the only other standout announcement that has blessed XRP markets.

“Additionally, investors may have finally realized that many of the banking partnerships announced by Ripple Labs weren’t related to the use of XRP or involved payments from Ripple to these institutions to incentivize them to try out the fintech company’s products.”

In 2017, the report concluded, the rush towards buying XRP over Bitcoin and other highly priced cryptocurrencies was because of “Unit Bias,” where investors were scared off due to the sheer price of Bitcoin, which at the time was in five-digits.

With XRP and XLM largely left out of the Bitcoin-induced bull run, bank coins are changing course and finally heading into the green, with both coins seeing over 9 percent daily gains. XRP’s turnover against Bitcoin is also down to the BTC bulls backing off over the past few hours. However, to get back to winning ways, consecutive green candlesticks will hold XRP in good stead.